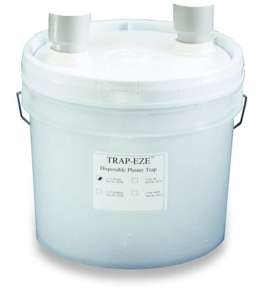 What is a plaster trap?

Plaster traps for sinks are gravity trap vessels or strainer-like structures that are built into water waste disposal systems under sinks of dental laboratories to separate plaster debris from the drained water and prevent clogging and blockage which would result in costly repairs. Plaster traps are either disposable and thrown away after several uses or reusable—easily removed, cleaned, and replaced. Plaster Traps operate by slowing the flow of wastewater allowing gravity to settle plaster sediment at the bottom of the container.

How to tell when a plaster trap needs to be replaced

Plaster traps should be changed once every 6 to 12 months. Check your trap weekly, and change the trap when the residue is within 2 inches from the top of the trap or if an odor becomes noticeable. Buffalo Trap-Eze employs built-in sanitization to reduce growth should biologicals happen to be washed away in the same sink.

Some plaster traps, such as the Buffalo Trap-Eze BT, are transparent so they can be visually inspected. If a plaster trap is not transparent, squeeze the intake line to see how well the trap flows.

Major manufacturers of plaster traps include Buffalo, Handler, and Keystone.

Learn more about the contributions of dental plaster traps.